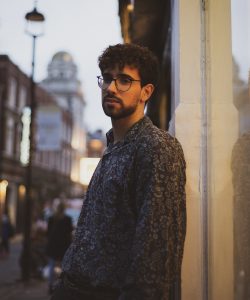 Jay Blanes is a singer-songwriter and producer based in London. Born near Barcelona, he infuses his passion for indie and pop with his Latin roots to create good vibes.

Jay has been performing for live audiences since age 7, in cities such as London, Paris, Los Angeles or Barcelona. In fact, his free spirit inspired him to busk on the Santa Monica Pier and in Trafalgar Square for a year.

He writes, produces, records, mixes, masters, performs, and markets his own music and videos. So, everything you hear or see… is a little part of him!

His constant struggles with an anxiety disorder developed during the pandemic led him to learn about mindfulness and dive into psychology. Constantly questioning his thoughts and life, he realised obsessing with his “big dreams” was unhealthy. So now, he only seeks to have fun, spread kindness, and make the world a better place.

Jay released his third EP, Magic, in April 1st 2022, and he is preparing to release his fourth in 2023. If you want to stay in touch and get updates about new music, subscribe to his newsletter for free and get free merch here!